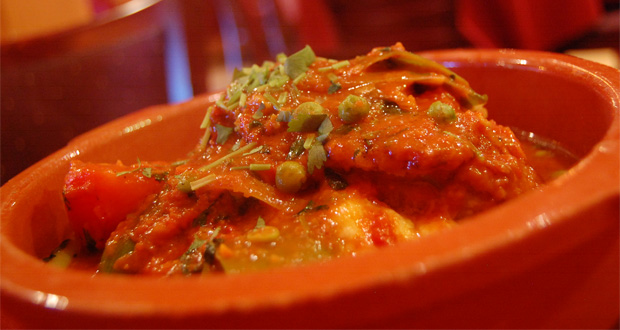 A dear friend gave me a tagine and tagine cookbook. The tagine pot is a Berber dish from North Africa. It is formed entirely of a heavy clay, which is sometimes painted or glazed. It consists of two parts: a base unit that is flat and circular with low sides and a large cone- or dome-shaped cover that sits on the base during cooking. The cover is designed to promote the return of all condensation to the bottom. With the cover removed, the base can be taken to the table for serving.

I found this super low carb recipe and super high protien tagine dish that just made my senses come alive! We used Tilapia but Cod or Catfish also work well. Although this is a recipe to be cooked in a tagine it can however, be cooked in a covered frying pan just as sucessfully.